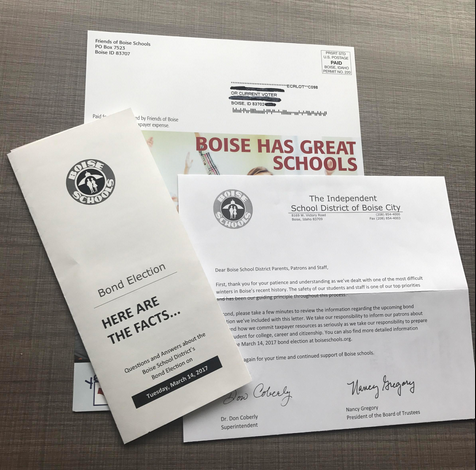 Bonds in Idaho can be hard to pass, in part because a lot of “yes” votes are needed at the polls. So how school districts explain their need and the cost to voters is critical in a bond campaign.

In this installment of our Financing the Future Series, we take a closer look at the Boise District’s bond and why it could be a challenge to pass.

The Boise School District says it needs $172 million to fix or replace aging schools and relieve overcrowding. They’re asking voters to support a 20-year bond. If approved, the district would borrow the money and property taxpayers will pay back the principle and interest for the next two decades.

Usually, when voters approve a new bond, they have to pay more in property taxes. Nancy Gregory is the Chairman of the Board of Trustees. She says this bond is different.

“It will not raise the tax rate. The tax rate on this specific bond will not go up,” says Gregory.

But how is that possible? For that answer, we turn to Nancy Landon. She’s a budget and finance administrator for the Boise School District. She gives four reasons.

First, she says, the district has restructured its debt so the current tax rate of .70 cents per $1,000 of marketable property value won’t go up. Landon says they refinanced previous school bonds to save money. Think of it like refinancing your house, for a better interest rate. That saves you money on interest and your payment goes down.

“We refinanced the prior bonds, the 2006 bonds, and so we saved almost $5 million just on that refunding alone,” says Landon.

Landon says market value has increased. In other words, in the decade since the Great Recession, the value of property in Boise has been going up.

“And because the market value has continued to grow in the Boise area and inside our district boundaries, we can keep that rate the same and collect some additional taxes to pay those bond payments,” Landon says.

Landon says the district was able to pay off some previous debt, including the 1996 bond. That means the property tax payments you were paying on that bond can be switched to the new one.

It was paid off in August of last year.

Let’s pause a moment here. If you vote “no” on this new bond, will you get a tax break? Not necessarily right now. Landon says in the event of a “no” vote, the Board of Trustees could decide to accelerate the remaining debt payments on the 2006 bond.

“We could continue to collect those taxes and just accelerate those payments, thus reducing the debt so it would get paid off sooner than 2024,” says Landon.

She says retiring the 2006 bond early would save taxpayers interest money. So if voters said no to the 2017 bond, and if the Board of Trustees decided to shift that money to pay off the 2006 bond, and if there were no new bonds, one day, those taxes would drop for Boise property owners.

“Eventually, if the bond did not pass, we would lower those taxes after those other old bonds were paid off,” Landon says.

And lastly, before 2008, school districts had to share some of their property tax money with urban renewal districts. A law change that year means schools now get to keep all their tax money they raise from bonds. Landon says that translates to an extra $900 million in property value that’s taxable if the bond passes.

Landon says if you put all these things together, the district can raise the money, without increasing the tax rate. But it will still be a tough fight because in Idaho, districts need a two-thirds super majority to pass a bond.

“Which is a high bar, as you know it’s one of the highest bars in the United States. Idaho has a pretty high bar to pass a bond for local districts to go into debt,” Landon says.

The super majority requirement is not that common. For most of the U.S., school districts only need a simple majority to pass a bond. That’s according to Cameron Arial, an adjunct professor of public finance at Boise State University.

The Boise School District needs 66.6 percent of voters to say yes. Arial says that’s a hard number to reach anywhere, but especially in Idaho. He says this is a very conservative state and a bond means borrowing money.

“Bond tends to be a four-letter word in Idaho,” Arial says.

He says sometimes people can’t see past the sticker shock. They worry about what they will get for their tax dollar.

That’s when he says school districts need to educate their electorate.

“Districts need to have a defined, well-understood need that they can articulate simply. And then from there, articulate simply, how they plan to pay for it, and then distribute that information far and wide and as transparent as possible,” Arial says.

Arial advises entities on bonds and recalls a success story. His client faced a tough fight to get a bond approved at the polls but he distilled the campaign down into a one-word bond slogan. He says it doesn’t get simpler than that. And they encouraged everyone to vote their conscience. That bond passed with a very large margin.

“So is it possible? Yes, it is. But I think it takes courage, I think it takes clear communication and I think it takes good financial information as well to help those voters, empower them to get educated on the issue and then participate. If you don’t agree, shoot, that’s fine, that’s your right, but if you do, you need to get out and vote for this,” he says.