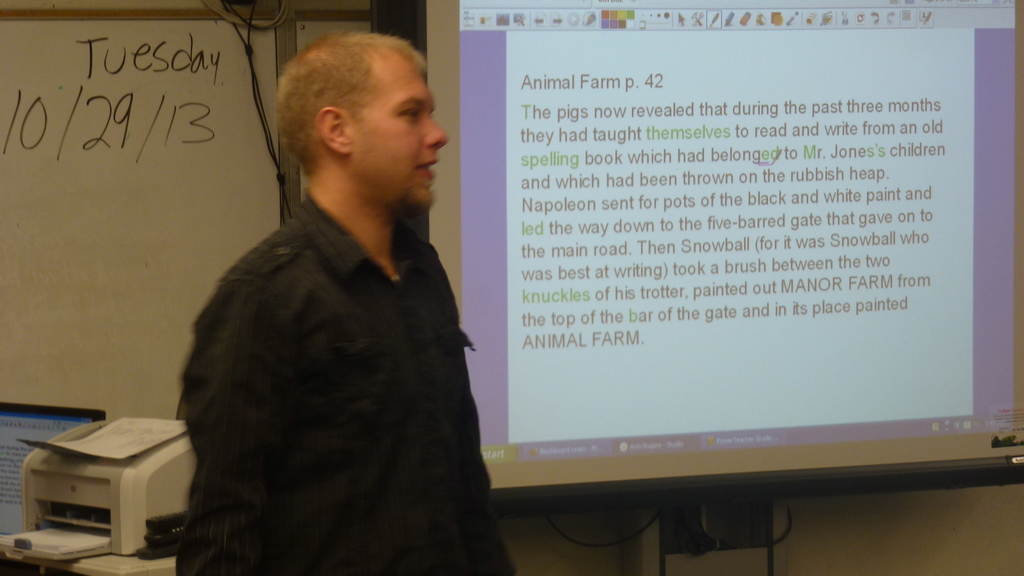 EDITOR’S NOTE: Eleven Idaho schools are launching an experiment this fall. They are using $3 million in state grants to try out methods of using technology in the schools. This is the 10th of a series of stories on the grant recipients.

Some students took a turn standing in front of the class, using an electronic pen to highlight the mistakes on a large interactive whiteboard. The whiteboards can be an audiovisual gadget — so students were a bit disappointed when Eberlin told them they would be watching an adaptation of “Animal Farm” for the rest of the period on their classroom TV. Some students were holding out for the big whiteboard, with its 72-inch screen and surround sound.

But the new interactive whiteboards, installed just last week, are first and foremost a learning tool. Moscow school officials believe the whiteboards are a versatile tool to enhance the learning experience, and prepare students for using laptops or tablets as a day-to-day learning device.

Some schools are using their technology pilot grants to test “one-to-one” models — plans that provide every student with their own tablet or computer. Moscow Middle School opted for a different approach: a less costly, $180,000 model.

Efficiency was a factor. A one-to-one program poses logistical challenges, from wiring to maintenance, and at this time, the prospect seemed a bit “overwhelming,” Principal Kevin Hill said.

For Moscow, the whiteboard approach uses a known quantity. Three years ago, the school used an earlier grant to install the boards in its four special education classrooms. Students who were afraid to work on math problems at a conventional whiteboard were more willing to use the interactive whiteboards, since they could stay at their desk and write on a wireless “slate” that connects to the board. “The kids were suddenly much more interactive with the content,” said Rachel Aiello, a math teacher who has used the boards in special education classes, and worked on the most recent Moscow grant application.

But since special education students comprise less than one tenth of Moscow’s 550 students, this success was something of a good news-bad news proposition. “We are seeing measurable gains for students who experience their instruction through the interactive systems, but this advantage is inequitably provided to only 9 percent of our student population,” Moscow said in its grant application this spring.

For a school that received three stars in Idaho’s latest five-star ratings, this latest grant is seen as a chance to build on past success.

Beyond the big screen

Ask teachers about the newly installed boards, and they excitedly rattle off the possibilities.

Aiello likes the built-in tools: virtual rulers and compasses for geometric sketches; a dice-rolling program that teaches probability; and virtual blocks that visually illustrate the size difference between one half, or one third or one quarter. Business technology teacher Jennifer Lynn expects the boards to reshape the way she teaches classes in technical literacy and computer applications. World history teacher Angie Bailey is excited to use an interactive site that will allow students to guide tours through the ancient pyramids. “I feel like I‘ve barely tapped the surface of where I’m able to go, but I’m super-excited.”

Moscow officials believe the approach is just as versatile outside the classroom.

Through the whiteboards, and through the use of cloud technology, it will be easier for parents to see videotaped lectures, learning materials and their kids’ assignments, Hill said. As middle schoolers advance past the age when they want their parents volunteering in class, it’s critical to provide parents with a window into the classroom.

School officials also hope to narrow demographic gaps between students. Between 70 to 75 percent of the school’s students have home Internet, Hill said. But all students and parents will be able to use the cloud to access homework after hours, at a public library or at a school computer lab.

“We want to be an open source,” Hill said.

First step in a transformation

Moscow’s technology initiative is in its infancy now. But it won’t last.

By next spring, the school should be fully equipped with wireless and fiber optic connections — thanks to a bond issue approved in May. Around that time, the school will launch a “bring your own device” policy that will allow students to use their own smartphones, tablets or computers.

This is no substitute for a one-to-one technology plan — administered uniformly, on a schoolwide basis. And the school’s grant application says as much. “This is the first step in preparing the classroom for individual technology devices and providing the professional development to staff to meet the challenge.”

Aiello, one of the school’s early adopters of interactive whiteboard technology, knows the day of one-to-one technology is coming soon. And she knows it will be a big change for her, because she will have less control over the learning tools and websites students use to try to master material.

The pilot is an important transitional step, she says. But for students who are comfortable learning digitally, the transition can’t come too soon. “The more information you can get them on that screen, I think, the better off they’re going to be.”