Joshua Emara bounces back and forth, his eyes focused on the crowd, consumed by the moment.

He calls himself a plancer — a violinist who dances.

The 13-year-old entertains in front of Jamba Juice, where the manager gave him permission to showcase his talents. His electric violin case fills with dollar bills every Saturday as he performs during the Capital City Public Market on Eighth Street.

“It’s never been for the money,” Joshua said. “I perform to bring joy, happiness and excitement to people.”

The people who walk by Joshua while purchasing vegetables and locally made goods seem to be impressed. He racks up nearly $300 every time he performs at the market. The cash is going towards music equipment and college savings. He hopes to get accepted into New York City’s prestigious Juilliard School, which has produced famed entertainers such as Kevin Spacey, Robin Williams, Barry Manilow and dancer Paul Taylor.

“Juilliard is a long shot,” Joshua said. “You never know though, by the time I graduate I might be more experienced.”

His passion for music started with Madonna at age 3. His mother, Shauna Emara, was watching Madonna’s confessions tour on television and Joshua fell in love. For six months he watched the tour most every day and mimicked her dance moves. He danced in the car seat, the living room and patio. He put on dance shows for the neighborhood and at birthday parties.

“I knew he had something special,” Shauna said. “Joshua can hear something in music that most people can’t.”

His Madonna obsession continues. His bedroom wall is lined with 70 photos of the pop star. “Madonna inspires me because she never cares what anyone thinks of her and she is constantly surprising people and pushing the boundaries,” Joshua said. “I want to have a similar outlook on life.”

Joshua danced during his elementary days. He performed in the talent show in kindergarten at Owyhee Elementary School and was part of a dance club that performed in competitions. He also danced in front of the mirrors at a Boise community center for his enjoyment.

“He was always known as Joshy the dancer,” Shauna said.

When Joshua picked up a violin for the first time at age 10, he taught himself to play through YouTube videos and learned through the school band. While learning the strings of the violin he discovered Lindsey Stirling, a YouTube star who is a dancing violinist. Joshua realized he can combine both talents.

“Music is my therapist,” Joshua said. “It’s something I can go to during a bad or happy time in life.”

Playing an instrument is in his bloodline. His grandmother was a piano and organ teacher and his mother is a piano and violin performer and teacher. Shauna didn’t have time to teach Joshua how to play though. She works three part-time jobs and is a single mother of three boys.

“Joshua took it all up on his own, he didn’t need my help,” Shauna said. “Of course I gave him advice when he asked.”

He plays on a full-size and electric violin and practices two hours a day perfecting the skill of playing while dancing. His focus is electropop music.

“This is not a sacrifice because I love performing,” Joshua said. “This is my passion.”

Performing at the market started when Joshua needed to pay for science camp. He didn’t want to be part of a cookie fundraiser with fellow students. The market is now opening doors for gigs. His market exposure has led to the free production of a music video, performing job in Twin Falls for the Special Olympics. And this month, Joshua performed at his first wedding.

“All I wanted to do was perform in front of people,” Joshua said. “I never thought it would turn into this.”

His next goal is to head to Las Vegas and audition for “America’s Got Talent” in December. 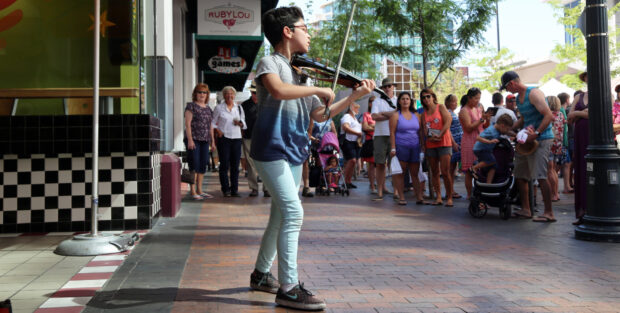 “I think I have a shot at winning,” Joshua said.

He plans to join the orchestra band in High School and dreams of becoming a musician where he can travel the world and share his music.